To share your memory on the wall of Leona Kauffman, sign in using one of the following options:

Lee Kauffman,96, passed away on December 18, 2020, at her residence in Newton, Kansas. She was born August 7,1924 in Barton County, Kansas to Ida and Siegmund Dietz. In 1948 Lee married Donald Doyle of Lakin, Kans... Read More
Leona (Lee) E. Kauffman

Lee and Derald were lifelong Kansans, residing in Garden City and Scott City before settling in Abilene in 1963. Lee attended Salt City Business College in Hutchinson, then worked at Dun & Bradstreet Corporation in Wichita. She was a homemaker and also a skin care consultant for Luzier Cosmetics for 43 years. Lee was a charter member of Abilene Christian Women’s Club, involved in First Presbyterian Church for over 60 years, and received the honor of being the oldest and longest serving volunteer at Abilene Memorial Health System in 2014. She enjoyed bowling for many years, often as part of a winning team, as well as crocheting and traveling.

Lee was a loving mother and grandmother and people enjoyed her presence. Surviving her are daughters Mona (George) Krievins of Newton and Noreen (Ed) Fenton of Topeka, sister Esther Karst of Hoisington, and brother Markus (Caroline) Dietz of McPherson. Lee is also survived by grandsons Matt Stowe (fiance Nicole) of Overland Park, and Tony Stowe (girlfriend Emily) of Kansas City, step granddaughters Alaina (Matt) Martin of Austin, Texas, and Kayla (Caleb) Lind of Norfolk, Nebraska, and their families, which include eight great-grandchildren. A number of dear nieces and nephews and longtime friends also stayed connected with Lee throughout her long life.

A service to celebrate the life of Lee Kauffman will be held at Martin-Becker-Carlson Funeral Home in Abilene on Wednesday, December 23 at 1:00 p.m. The family asks those attending to wear masks and seating will be limited due to COVID precautions. Lee will be laid to rest in the Abilene cemetery following the service. Memorials may be given to MHS Volunteer Corps in care of the Martin-Becker-Carlson Funeral Home, 414 NW 3rd, Abilene, Kansas 67410. For those unable to attend, the service may be watched live at
https://www.facebook.com/events/3612699965457652/
Read Less

Receive notifications about information and event scheduling for Leona

We encourage you to share your most beloved memories of Leona here, so that the family and other loved ones can always see it. You can upload cherished photographs, or share your favorite stories, and can even comment on those shared by others.

From the Nulik Families, Esther, and other have sent flowers to the family of Leona E "Lee" Kauffman.
Show you care by sending flowers

From the Nulik Families purchased the Medium Dish Garden and planted a memorial tree for the family of Leona Kauffman. Send Flowers

Posted Dec 21, 2020 at 10:08pm
Aunt Lee was a remarkable lady who lived a long and fulfilling life while having endured tragedy and loss as a young wife and mother. We celebrated her 95th birthday with her and family members at a party at Mona and George’s home in Newton and she was vibrant, joyful, and amazingly youthful looking. We really enjoyed being with her and the family and will always have those memories to keep her alive in our hearts. While we mourn losing her, we are happy for her because she died peacefully, surrounded by love. What more can any of us ask for? Peace, Aunt Lee, no more suffering. You have transcended your earthly bonds and the entire universe is your playground now.
Love,
Dennis Nulik and Harper Jackson (Wichita KS)
Comment Share
Share via:
M

Posted Dec 21, 2020 at 11:41am
Sister, Esther, remembers “We we’re close”. They walked to school together;
sometimes rode the horse. They played together and especially enjoyed playing with Cousin Milda. Esther and Lee stayed close their whole lives.
My memories of (Aunt) Lee are from forever too, but especially from the early 70s when my young daughters and I lived nearby in Abilene. Such fun we had! Lee was ready for almost any experience and her laughter was infectious! The Kauffmans spoiled my girls and helped me , a young mother.
Throughout her lifetime, Lee loved to make memories and recall them with you later. Hers was a life well-lived and we were blessed to be part of it.
Mona and Noreen and families, may you
find the comfort you need for this loss.
Melinda and John
Comment Share
Share via:
E

Esther purchased flowers and planted a memorial tree for the family of Leona Kauffman. Send Flowers

Flowers were purchased for the family of Leona Kauffman. Send Flowers 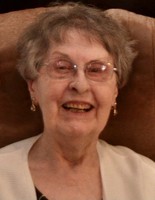