To share your memory on the wall of Steven Ferguson, sign in using one of the following options:

Receive notifications about information and event scheduling for Steven

We encourage you to share your most beloved memories of Steven here, so that the family and other loved ones can always see it. You can upload cherished photographs, or share your favorite stories, and can even comment on those shared by others.

Posted Feb 26, 2021 at 11:56am
My condolences to your family. Steve was a classmate of mine...1958! We shared some fun times together back in those days. He is remembered by many...and I did notify a class member, so they could get the information out. Remembering all of you as you walk through this difficult time.
Betsy Stapf Connell

Posted Feb 25, 2021 at 10:37pm
Deon & Family-Please accept our most heartfelt sympathies for your loss... Our thoughts are with you and your family during this difficult time.

Flowers were purchased and a memorial tree planted for the family of Steven Ferguson. Send Flowers 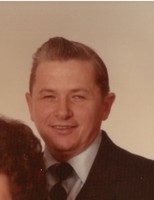