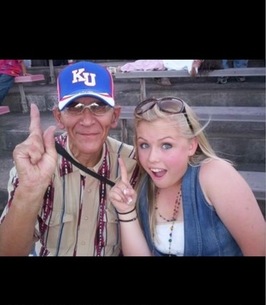 On Sunday, April 3, 2022, Robert “Bob” Martell Jr. passed away peacefully at Abilene Memorial Hospital with family at his side.

Born in Fort Riley, Kansas on June 22, 1951, Bob was the oldest of four children. He was a self-proclaimed “military brat” and lived in various locations including Junction City, Kansas and Killeen, Texas, before moving to Pierre, South Dakota. There he attended Redfield Public School and excelled in sports, including track, tennis, and Special Olympic events. His family’s final move was to Abilene, Kansas in 1975, where he worked for OCCK at Sparkle Car Wash and Great Plains Manufacturing.

Bob was well-known throughout Abilene, as he frequently attended community events and enjoyed cheering on the local sports teams. His love for singing and dancing everywhere, affectionately earned him the nickname “Disco Bob”. The Central Kansas Free Fair and Wild Bill Hickok Rodeo were events that he looked forward to. He was honored to be part of the parade, proudly carrying the American flag, which became a coveted tradition.

Bob was passionate about life and enjoyed spending holidays and vacations with his family and friends, going to church, watching television and movies, and going out to eat. He was an avid collector of movies and would proudly tell you about his ever-growing collection. He was a regular at the Plaza Theater prior to its closure earning him a dedicated seat. He frequented Joe Snuffy’s many mornings and could be found there often having his usual of sausage, hashbrowns, “overeasy”, toast, black coffee, and water. He also enjoyed his reoccurring role in the Easter Pageant at Brown’s Park. His favorite sports teams included the KU Jayhawks, Dallas Cowboys, and KC Royals.

Bob was preceded in death by his father Robert Martell Sr. and mother Lucille of Abilene, Kansas. Bob is survived by his brothers and a sister; Jimmy Martell of Sioux Falls, South Dakota., Bonnie Green and husband Glenn, of Assaria, Kansas, and John Martell of Salina.

His nieces and nephews include; Glenda and husband Jason of Citrus Heights, California, Susie and Peter of Leawood, Kansas, Chelsie and husband Alex of Lenexa, Holly and husband Chance of Argyle, Texas, and Bryant of Argyle. Bob also leaves behind many friends in Abilene, Kansas.

In lieu of flowers, donations in Bob’s name can be made to OCCK at OCCK.com/donate and to Meals on Wheels - Abilene, Kansas.

A Celebration of Life will follow the services in Old Abilene Town at Bull’s Head Pavilion on Friday April 22, 2022 from 4:30-6:30pm. Please join us while we share stories and memories of Bob.

We are so grateful to the people of Abilene for their love and support. Bob was so proud to call this town his home.