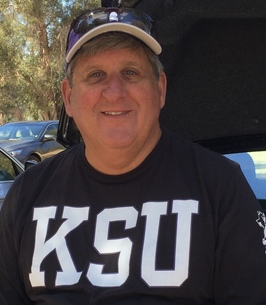 R. Michael Robson, 67 passed away June 3, 2022. He was born May 2, 1955 in Abilene, KS the son of Robert and Anne Robson.
He attended Abilene schools and graduated High School in 1973. He then attended Kansas State University with a Bachelor’s of Science where he was a proud member of the Phi Gamma Delta fraternity.
July 19, 1978 he married his High School sweetheart, Anna Piland.
He then attended Dental School at University of Missouri Kansas City and opened his private practice in Abilene in 1981 where he continued to treat the Abilene community for 39 years. He spent the last 4 years of his career working alongside his daughter, Carey.
He was an avid K-State fan, golfer and proud grandfather. He enjoyed traveling especially to Cabo San Lucas, MX.
Survivors include wife Anna Robson, daughter Carey Jones (Derek), granddaughter, Kenlee Jones, brother Pat Robson (Sue), father, Robert Robson and brother in law Steve Piland (Karen). A celebration of life for Mike will be June 25, 2022 from 3-5 P.M., at the Shockey and Landes Building (324 N. Broadway, Abilene, Kansas 67410.) A memorial for Michael Robson has been established at the Kansas State University Foundation. The memorial will be a scholarship fund for Kansas State University graduates planning to attend Dental School. Contributions may be sent to: KSU Foundation, 1800 Kimball Ave., Ste 200, Manhattan, KS 66502; please indicate fund M47406. To make a gift online, go to www.ksufoundation.org/give/memorials.
Online condolences may be sent to www.martinbeckercarlson.com