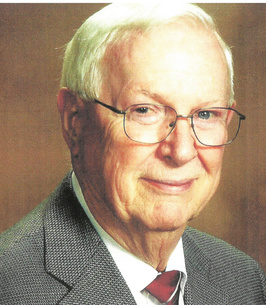 Kenneth R. Pyke, 93 of Abilene passed away Saturday, October 15, 2022 at Memorial Hospital in Abilene. He was born September 11, 1929 in Abilene, Kansas, the son of Roy W. and Ruth K. (Gish) Pyke. Kenny grew up in Abilene, attended the Abilene school districts and graduated from Abilene High School. On October 28, 1951, he was united in marriage to Carole L. Allison in Wichita, Kansas. He enlisted in the United States Army in 1951, serving two years in the 11th Airborne stationed in Ft. Campbell. He was the manager at A&P Grocery and later worked as an assistant team leader at Duckwalls. He was a member of the Abilene First Christian Church in Abilene, and was a member of the Eisenhower Foundation and the Dickinson County Historical Society. Kenny is survived by two daughters-in-law: Dianne (Wood) Pyke of Springfield, Missouri and Kathleen (Newlin) Pyke of Hays, Kansas. Grandchildren: Amanda (Pyke) Brantley (Stuart); Christopher Pyke; and Scott Pyke. Great-Grandchildren: Cobie, Coltin, and Ryker Pyke. One sister-in-law, Barbara Pyke and numerous nieces and nephews. He was preceded in death by his parents, loving wife Carole, two sons, Thomas Pyke and Dale Pyke and a brother, Ralph Pyke. Funeral services for Kenny will be 10:00 A.M., Wednesday, October 19, 2022 at the Abilene First Christian Church with Pastor Jason Kohler officiating. Burial will follow at Bethel Cemetery, rural Abilene. Family will receive friends Tuesday evening from 5-7PM at Martin-Becker-Carlson Funeral Home of Abilene. The family suggests memorials be given to the Abilene First Christian Church or to the Eisenhower Foundation. Memorials may be dropped off or mailed to Martin-Becker-Carlson Funeral Home, 414 NW Third St., Abilene, KS 67410. Online condolences may be sent to www.martinbeckercarlson.com