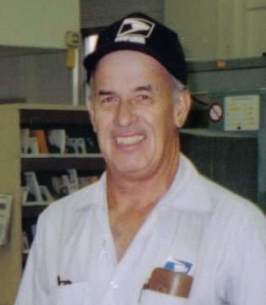 Don was born on January 12th 1941 in Manchester, KS to Frank and Ruth Coup (Oard). As the son of a farmer in rural Dickinson County, Don grew up appreciating so much, while having so little. His humble upbringing instilled gratitude, hard work, and dedication to family that was recognized by all who knew him and a lot more that did not.

In high school Don played many sports sparking his lifelong appreciation for fitness. He graduated from Dickinson County Community High School in 1959 then attended Emporia State University. In 1963 he enlisted in the Navy and served on the USS Saratoga (CVA-60) as Aviation Storekeeper touring throughout the Mediterranean. In 1975 after his military service, he settled in as a postal carrier that would span nearly three decades. Don walked thirteen miles a day for over 27 years 9 months 21 days, was bitten by dogs four times, out ran many more dogs, ate too many Christmas pound cakes and all within the extremely adverse rain, blistery cold and scorching hot weather of Kansas.

Don married Sharon K. Williams (Tunget) on November 8th 1980 in Talmage, KS and spend their married life in Abilene, KS. Don was blessed with a large and loving family.

Don retired and widowed in 2003 spending his time with family, woodworking, traveling, and being an avid bicycle rider. Don was known for his friendly and caring nature along with his everlasting smile.

Survivors include one daughter Shelly Ihnken of Mt Pleasant, TX; one son Jon Williams of Abilene; his brother Larry of Talmage; twelve grandchildren, nine great grandchildren and many other relatives.

He was preceded in death by his wife Sharon; father, Frank; and mother Ruth.

Don’s celebration of life will be held 12 o’clock (noon), June 11th 2022 at his home of 1002 N Walnut, Abilene, KS to allow family and friends to travel and book tickets. Memorial contributions can made to Martin Becker Funeral Home in Abilene, KS for the Eisenhower Park Rose Garden.