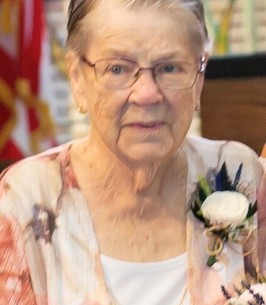 Carol J. Pirrello, age 95 of Abilene, formerly of Rockford, Illinois, passed away Sunday, January 2, 2022 at the Garten’s Countryside Estates in Abilene. She was born July 17, 1926 in Mystic, Iowa, the daughter of George and Reva (Stark) Lewis. She graduated from West High in Rockford, with the class of 1944,

Carol was a homemaker and worked for the Rockford Life Insurance Company for 13 years and worked along with her husband for 21 years for DI-AB-CO until retiring. She was a member of the Central Christian Church and enjoyed playing cards, knitting, doing cross stitch, sewing, fishing and boating, but especially loved being with her family.

Cremation is planned. Services will be held privately with family and close friends at a later date. Her final resting place will be in the Rock Island National Cemetery with her loving husband Leo Pirrello.

Memorial contributions may be made to Garten’s Countryside Estates in Carol Pirrello’s name and may be sent in care of the Martin-Becker-Carlson Funeral Home, 414 NW 3rd, Abilene, Kansas 67410.